There is no shortage of monuments to the Antebellum South. Although Dallas County was home to only 932 slaves on the eve of the Civil War (compare to 8,101 in Harrison County only 150 miles to the east), even Dallas has her Millermore and her Lee Park.

Perhaps not so much to counter the romantic myth of Southern gentility as to redress the desecration of the graves of freedmen by Central Expressway construction in the late 1940s, Dallas offers the Freedman’s Cemetery Memorial. At the memorial’s center, a man and woman face the eastern gate, their eyes cast downward so as to spare the shackled man and woman who flank the gate the shame of their chains. On the opposite side of the gate, beyond the view of those wit 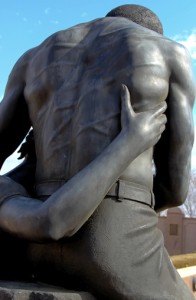 hin, a warrior and a maiden stand sentinel, again facing east, toward Africa. Representing a proud, free African past, these figures greet the visitor to the monument. On the opposite face of the gate, facing west, the two chained figures depict the horror of the Middle Passage to America.

The status of the man and woman at the center of the monument is less explicitly defined. They are barefoot. The man is shirtless. His back bears the scars of lashing. They may be slaves; they may be free. If they are freedmen, they cannot be long out of bondage, for they are in the prime of life, and the man’s welts appear fresh. Does the anguish in their faces arise from the humiliation of forced servitude and the pain of the flogging, or from the uncertainty of starting life over, shoeless and shirtless and still stinging from the lash, in a world that offers no welcome?

The story told at the Freedman’s Cemetery trails off at the threshold of independence, and there falls silent. There is not so much as a gravestone to bear witness to the life of people who pulled themselves up from slavery by the strength of their community. With but a single exception, St. Paul United 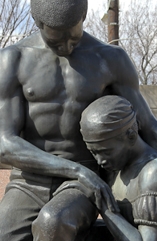 Methodist Church, the Short North Dallas community that once rivaled Houston’s Fourth Ward for its industry and vitality has vanished. With very few exceptions, like the Moorland Y.M.C.A. building, the McClellan drinking fountain in Griggs Park, the building that once housed St. James, and the old section of Booker T. Washington High School for the Performing and Visual Arts, even the evidence of the community has been erased. David Newton’s heroic bronze statues and their polished granite setting honor the memory of the freedmen in death, but these are not the things they built, the doors they opened and the thresholds the soles of their feet polished in the course of living life. A marker, a monument, speaks for a departed community when there is no one and nothing left to speak for itself.

These are not the things they touched. 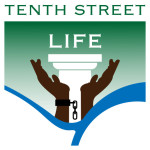 Historic Tenth Street may well be the last, best chance in the nation to let the land the freedmen bought and paid for and the homes, businesses, and institutions they built on it with their own hands speak for themselves. 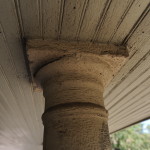 These are the things they touched. Tenth Street has a story to tell.

Let’s begin by clearing up a few misconceptions.